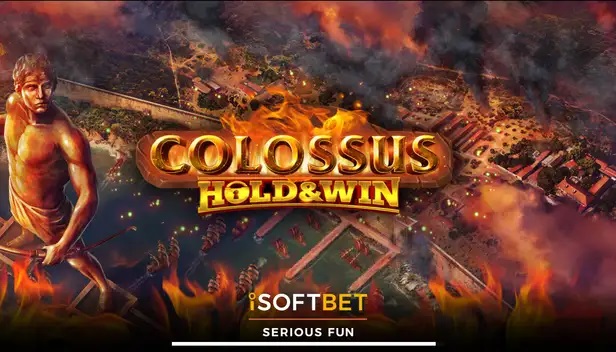 We’ve seen plenty of slots with an Ancient Greece theme, but this one uses the Colossus of Rhodes as its focal point. Colossus: Hold & Win is iSoftBet’s newest game, and it features some very standard concepts, such as the popular streak respins that we’ve seen in dozens of new games each month.

The conventional 20 lines on 5×3 reels were used in the creation of Colossus: Hold & Win. If we go by the High volatility rating, it won’t be easy on the player, but it also pays up to 10,000x the stake and has an RTP of 96 percent. When you add in the growing wilds, the Hold & Win feature, and the Colossus Spins, there should be plenty to keep you entertained.

The betting method is kept basic, as it is in many other iSoftBet games we’ve played over the years. It is based on 20 coins, with the total sum changing from $0.20 to $20 as the denominations change.

Colossus: Hold & Win has a lot of promise. The slot is one of many high volatility alternatives available these days, paying up to 10,000x the wager, or up to $200,000 after just one incredibly successful spin.

There’s even a respectable RTP, which is average at 96 percent, but sufficient to make the game worthwhile if you enjoy everything else about it.

Expanding wilds can appear on reels 2-5, which is a handy feature that makes it easier for the player to generate winning combos. These aren’t unusual, but they’re effective and add to the excitement of the slot machine.

Scatter symbols will also appear in Colossus: Hold & Win, in the shape of Coins with cash awards on them. These are only beneficial if you can obtain them in groups of six or more, with six or more required to enter the Hold & Win Respins.

The game will then give you three respins, with the triggering Coins remaining sticky throughout the function. You aim to acquire more Coins as you move through the respins. These will likewise stick, and the respins will be reset to three. After the feature finishes, you will be rewarded a random amount for each Coin symbol you earned.

There are a couple of other possibilities at this stage. For starters, there’s a 2x to 10x multiplier that can be triggered at any time and applied to all coin rewards currently locked on the reels.

Another example is the Colossus Spin, which occurs when all 15 Coins appear on the reels. Although this is no easy task, the Colossus Spin that follows makes it all worthwhile. It’ll be the one that can award you with one of the set jackpots, such as the Colossus, which is worth 10,000 times your investment. The Major and Minor Jackpots, valued 500x and 50x, respectively, are the other prizes.

They chose Ancient Greece as the scenario for their game, and the Colossus of Rhodes is the main character. This massive figure stands next to the reels, however it is scarcely visible. The smaller symbols on the reels are a collection of Royals, four of them in total, ranging from the J to A. The symbols depicting Greek warriors, body armor, weaponry, or trireme ships are next.

Colossus: Hold & Win appears to be a good game with a good number of features and a large payout that should be enough to keep players interested. It’s not the best slot machine on the market, but it’s better than average in most ways.