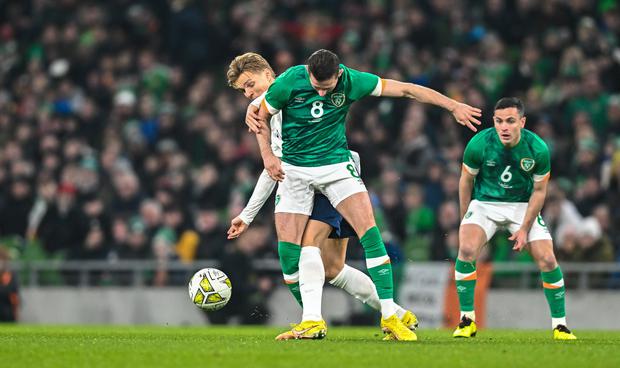 When Norway plays Finland in a friendly match on Sunday afternoon, they will be attempting to make it two wins in a row.

The host nation won its most recent game against the Republic of Ireland on Thursday, while Finland comes into this weekend’s showdown off a draw with North Macedonia.

Norway vs Finland  Tips and Prediction

On Thursday night in Dublin, Norway defeated the Republic of Ireland with a commanding victory thanks to a goal from Ohi Omoijuanfo in the 85th minute that proved to be the difference.

With their next game not until March 25, when they will play Spain in their first Euro 2024 qualifying match, Stale Solbakken’s team will now try to defeat Finland in what will be their penultimate encounter of the year.

Three World Cup finals have featured Norway, and they most recently took part in the competition in 1998, making it all the way to the round of 16.

The national team, which placed third in Group G, three points behind second-place Turkey, will not compete in the 2022 competition. Instead, they will be concentrating on Euro 2024.

With 39 wins and just nine losses, Norway has dominated their encounters with Finland throughout history. The other 14 games between the two countries have ended all even.

Finland, meanwhile, participated in Euro 2020, which was their first appearance in the championship of a significant international competition.

The Eagle-owls won their opening match against Denmark, but lost their subsequent two games to Belgium and Russia, placing them third in Group B. Having placed third in their qualification group, one point behind second-placed Ukraine, and with France winning the group quite handily, Finland will not be competing at the 2022 World Cup.

On March 23, Markku Kanerva’s team will face Denmark to start their Euro 2024 qualification campaign. They will also face Kazakhstan, Northern Ireland, San Marino, and Slovenia in the division.

Finland comes into this match following a draw with North Macedonia on Thursday. In their last three games, they have gone undefeated, including a victory over Montenegro in the UEFA Nations League.

We predict Norway to win again in this encounter since they are coming off a confidence-boosting victory over the Republic of Ireland. Although Finland is a squad to be taken seriously, we think the host team will have enough talent to win the championship.