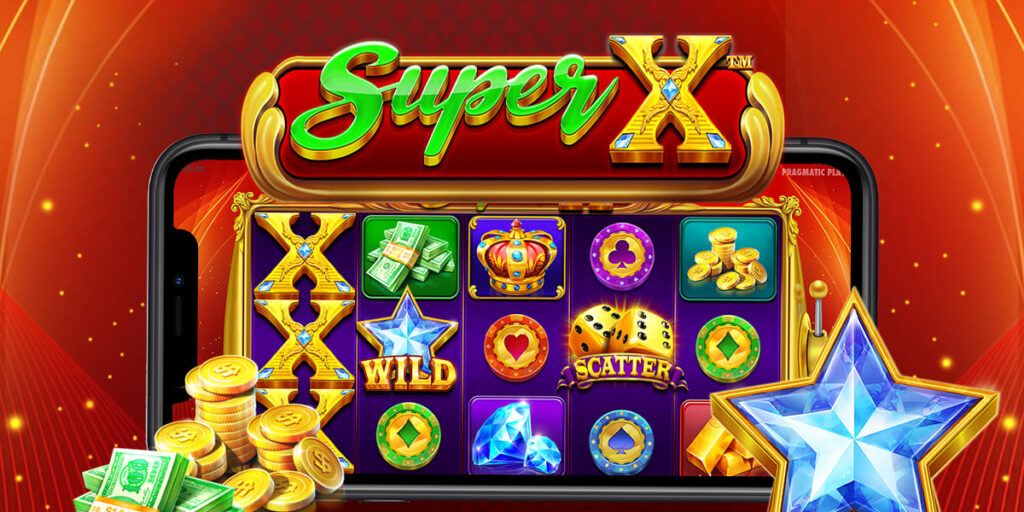 Super X is one of the new slot games from Pragmatic Play that will be released in the future months. It will feature the suitable current graphics that you’d expect these days. Nonetheless, the reels feature a lot of money/jewelry-related icons, which isn’t a particularly interesting theme choice. In many ways, it’s a classic release for this developer: highly unpredictable, with excellent rewards.

Super X has five reels and three rows, as well as a standard amount of active lines: twenty. You can win top prizes of up to 5,000x your stake ($500,000) with their help and the right features in a slot with high volatility and a maximum RTP of 96.51 percent. Wilds and scatters, as well as respins and free spins, will be prominent features.

You can choose a wager that covers all lines by adjusting the amount of coins per line and their denomination. The minimum wager is $0.20, while the highest wager is $100.

The awards paid out by Super X may be rather impressive, and we discovered that returns of up to 5,000 times the investment are possible. It’s a sizable return, with high rollers betting the maximum amount potentially winning up to $500,000 in cash.

High volatility is to be expected, however the RTP can reach 96.51 percent, with operators having the option of 95.45 percent or 94.46 percent.

The slot’s feature symbols will include a Star Wild, which the player will be able to use in its usual capacity as a substitute. When you combine it with conventional symbols on active lines, you can create combinations that would otherwise be impossible. They won’t be able to give you any rewards because they’re confined to reels 2, 3, and 4.

The second accessible feature is an intriguing one that relies on respins that are triggered anytime X symbols appear on reel 1. It preserves X symbols on the first reel and adds 0 to 9 digits to the other four. You will receive multipliers based on the numbers that land there, which will be applied to the round’s stake and converted into a prize.

In the other primary feature featured within, 5 free spins are also available. To activate it, you’ll need three scatters with the Dice. There are no normal free spins. Instead, the first reel has the identical X symbols as the others, with numbers that can appear on the other four. You’re aiming to acquire a multiplier for the round’s bet to claim as a prize once more, but you have a few more spins now. You’ll need a spin with no new numbers, just blanks, to get three extra spins.

Super X has a decent design, and its symbols are of good quality, but I wouldn’t call it unusual. Cash, jewels, and gold are among the items you’ll find on its reels, which isn’t unusual.

The four low-paying card suit images that are affixed to the sides of casino chips are the first symbols in the game. After that, we’ll look at high-paying gold coins, cash, gold bars, diamonds, and the top regular symbol, the Crown. There are a few special symbols, including a Star Wild, a Dice Scatter, and an X sign.

Super X is not a standard slot machine, despite the common theme and gold link. Its qualities make all the difference in this situation, and it’s a lot more interesting than you might think.