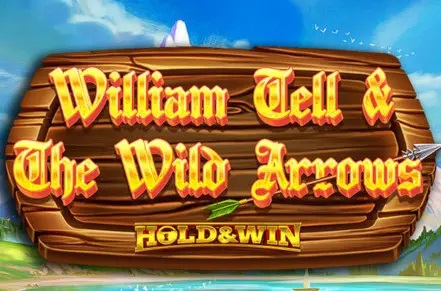 William Tell is known for his marksmanship in shooting an apple off his son’s head. But many don’t know that the Swiss folk hero had a much more sinister side to him. According to legend and Wikipedia, Tell assassinated Albrecht Gessler- a Hapsburg Landvogt- which then sparked a rebellion, leading to the beginning of the Swiss Confederacy. So it’s no surprise that this online slot game developer iSoftBet, William Tell & Wild Arrows, features our rebel friend as its protagonist. Let’s take a spin and see how well we do!

With its rolling hills, rugged mountains, water features, and quaint villages–not to mention cows with bells on them–Switzerland is unsurprisingly smothered in stunning vistas. iSoftBet’s William Tell & the Wild Arrows slot pulls in some of these sights, and while the view is quite inspiring, it doesn’t exactly break the sublimity meter. Perhaps that’s because realizing we were getting into another one of these run-of-the-mill Hold&Win slots with a distinctly run-of-the-mill set of prizes indicated above the reels was a bit of a buzzkill.

If you’re interested in trying your hand at William Tell, you can do so on any device. Just choose a stake of 25 p/c to £/€25 per spin. When playing the game normally, the theoretical RTP is 96%. However, if you buy the bonus game, you can do so for 60x the bet and enjoy a raised return value of 96.4%. Mathematically speaking, William Tell is a medium/high variance slot played on a 5-reel, 3-row gaming area with 25 paylines for lining up wins.

Three- to five-of-a-kind winning combinations can be formed with William as the most valuable symbol, followed by Gessler, then a lady character, and a soldier as the premiums. Two scenes of nature and a crossbow make up the mids, while Ace down to Jack is considered the low pay. If you hit a five-of-a-kind winning combo with royals, you could receive 1-2 times your stake back; for mid -pays 2.4  to 4x; highs, pay 6 to 16x. Lastly, Wild symbols act as substitutes for regular paying symbols to help complete winning pay lines.

The most distinguishing feature of William Tell & the Wild Arrows is its Hold&Win round, with a few other random modifiers occasionally appearing in the base game.

William’s Wild Arrow can trigger at the end of any main game spin. When this modifier is active, up to 5 symbols are transformed into wild symbols.

Gessler’s Greed has the potential to trigger at the start of any main game spin- when it does, all low-pay J, Q, K, and A symbols will be removed from the reels.

The last symbol to discuss is the Respin symbol. Getting five or more of them starts the William Tell & the Wild Arrows Hold & Win feature. The symbols that trigger this round stay in place for the bonus round, each with its bet multiplier value. Then you get three respins, and if any new Respin symbols land, they lock into place and reset the spin count back to 3. Values for Respin symbols can be 1x, 2x, 3x, 4x, 5x, 6×8 x10 x15 x20 x50 or 100.

When an arrow hits one of the empty grid spaces during the bonus, it divides that space into four. This is called Split Zone and means up to four Respin symbols can land there instead of only one. If the arrow hits a Respin symbol, that symbol splits into four instances with the same value as the original symbol. The spin counts as a win if Respin symbols are hit—returning the spin count to three—but not if space is split. Special Prize Respins symbols can also be landed on; these have values of 20x for Minor prizes, 50x for Major prizes, or 100x for Grand prizes.

iSoftBet has a lot of experience designing games like William Tell & the Wild Arrows, so much so that it seems easy for them. The gameplay is also very familiar, so we suspected it might be a clone. If the game had been more exciting, I would have put more effort into verifying whether or not this was true.

The ‘Split Zone’ is a feature during the Hold&Win phase when arrows hit the grid. It’s somewhat new and has a slight split/Megaclusters vibe. However, it’s nowhere near as intriguing as those other mechanics were. The feature is quite basic – an arrow hits a blank space, it becomes four mini-blank spaces; an arrow hits a Respin symbol, and it becomes four Respin symbols. Though it’s not dripping with innovation, adding Proof to the game surely excites players.

It is refreshing to see a studio branch out and go with a different character for once, rather than the default Robin Hood. However, it would have been even better if they had also Branched out further with the gameplay. If the team had put more effort into it, William Tell & the Wild Arrows could have been a unique production. It would not have been as attention-grabbing as a marksman hitting an apple off his son’s head, but still original compared to other games. As it is now, William Tell & the Wild Arrows has been amusing for a while, but it falls short of being a great Hold&Win release from iSoftBet.